Close Encounter with the Owls 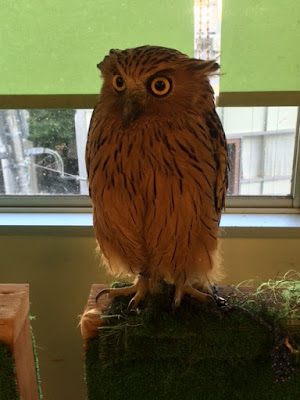 You may have seen owls before but perhaps only from the distance in the zoo. Here is the place to interact with them.
Among foreign tourists coming to Tokyo, "owl cafes" are becoming hot destination.  They are relatively new compared to cat cafes or maid cafes, which are now established as Japan's tourist attractions.

I recently went one in Harajuku.  There were 14 owls, small and large, on the table along the walls.  You can touch them and feed them.  Some of them may cry and spread their wings, but they do not attack you because they are not hungry being constantly fed by guests and staff.

When the large owls were static, they looked almost like objets d'art.  They are such beautiful creatures. 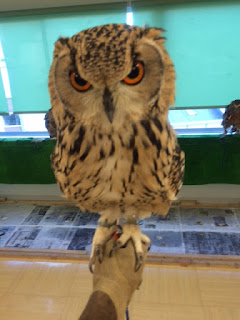 You are allowed to touch the owls on the head and also choose one to hold.  You will wear a thick glove to protect from the sharp claws.  As I was holding the rope tied to the owl's feet, the owl could not fly away but fluttered vigorously.  I felt the power direct to my arms. I had never observed an animal so intensely.

If you are not interested in cats or maids, owls may catch your heart with the round eyes and dignified posture.

Posted by Cognoscenti Japan at 12:30 AM