I made a short trip to Hong Kong last week and had a chance to dine in "Amber" at Landmark Mandarin Oriental.  It ranked 37th of the Top 50 Best Restaurants by S. Pellegrino in 2011, and the only Hong Kong restaurant among the top 50.  I do not always believe in Michelin stars or other ranking stuff, but this place was certainly worth visiting.

Their degustation menu was a series of pleasant surprise.   Beautifully prepared dishes with high level of artistry that taste good.  When you pursue artistry you tend to overdo and sometimes lose the texture of ingredients, but it is not the case with Amber.  I saw in their cuisine a delicacy that was common with Japanese cuisine, with a touch of the season.   Ambiance and service were also good.

The 8-course degustation menu must be very filling.  We skipped two and went with 6 courses, but it was still good enough (for gentlemen, too) especially with two desserts at the end.

Amber  www.amberhongkong.com
Posted by Cognoscenti Japan at 8:47 AM

I sometimes think that people travel in order to get the messages they are supposed to get, through things they see and people they meet only once in their lives.  It is up to you to notice the message or not.

The messages can range from clearly important ones to not so obvious ones.  Perhaps the message I got in Dubrovnik does not sound life-changing, but it changed my travel experience in Croatia for the better.

We were waiting for the hotel's porter in front of the Pile gate when we arrived in Dubrovnik, when a smiling Asian man saluted to us in English, "Good afternoon."  He asked if we were from Japan, we said yes, and he said he was from South Korea.  He was a social solo traveler, which is hard to be for many people.  He asked us to take a photo for him, and we did.  That was it then.

Three days later, when we were waiting for a bus to the airport near the Croce gate, someone walked toward us with a smile.  It was the Korean guy.  We met for the second time.  We didn't ask his name, so let's call him Mr. K.  We were heading for Zagreb and Mr. K was going home after traveling from Zagreb through to Dubrovnik.   We told him that we would stay in Zagreb and visit Plitvice National Park on a day trip.  Then Mr. K insisted, "Please, stay overnight in Plitvice."  He explained he had spent  two nights there and loved it.  He gave us tips on hotels and walking courses.  OK, I appreciated his advice,  but we already booked a hotel in Zagreb, so I wasn't really sure if we should change the plan.

When the bus arrived at the Dubrovnik airport, we wished each other a safe trip and walked in different directions.  But when we got on the airplane, we heard,
"Oh, we meet for the third time!!"
It was Mr. K.  His seat was right next to ours.  Out of dozens of seats, what a chance is that.

When we disembarked in Zagreb, Mr. K said again, "Please, stay in Plitvice!"

This time I realized we were meant to change our plan and stay overnight in Plitvice.

Plitvice is two and a half hours of bus ride from Zagreb.  We left Zagreb in the morning.  By the time we started walking, the national park was full of people, despite that it was not the peak season.  There were so many tour groups we sometimes encountered human traffic jam.  The waterfalls could not impress us enough because of the crowd.

We spent a night in Hotel Jezero and started walking again when the park opened at 8:30am the next morning.  We were the first visitors and had the park all to ourselves for quite a long time.  We enjoyed listening to the streams and birds, watching clear blue-emerald waters, and inhaling clean air.  We were able to appreciate Plitvice at its best.  What a fortune is that, to fully appreciate the beauty of a place that you may visit only once in your whole life.

Mr. K was right.  Next time I will take over his message and say to someone traveling in the area,
"Please, stay overnight in Plitvice!"
Posted by Cognoscenti Japan at 1:48 AM

I have just been to Taipei.  The main purpose of the trip was to visit Art Taipei that was just being held over the weekend, but I also found Taipei Fine Arts Museum very good. 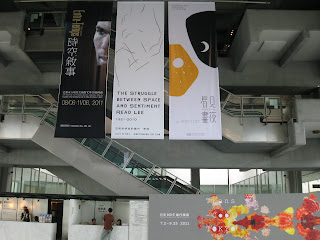 Because it is the city's municipal museum, you can enjoy 4 to 5 exhibitions for a mere 1 US dollar (NTD30) admission fee, and each exhibition is good.  Interestingly one of the exhibitions was "Trans-Cool Tokyo," which featured many of the most major contemporary artists of Japan.  Indeed it is a very efficient opportunity to have a quick overview of the contemporary art scene in Japan, and you would never see such a show in Tokyo.   So if you are interested in the Japanese contemporary art and happened to be in Taiwan, it is a must see.  It is open until September 25, 2011.

I was more impressed by the retrospective of Read Lee, "The Struggle of Space and Sentiment."  I did not know about the artist until I saw the show, but I was just fascinated by the colors and brush strokes of his abstract paintings.  Many of the works looked soothing to me, having no conflict, so to say.  And I believe that must have been what the artist struggled to achieve.

Lee said "In my paintings, I transform spacial concepts into natural forms."  On the other hand, according to Lee, Cezanne transformed natural forms into painterly space.
Posted by Cognoscenti Japan at 11:54 PM

I just learned that it is the season of observing the Perseid meteor shower.  This year the meteor shower is said to be active from July 23 to August 22.  Here on the Big Island of Hawaii, too, where you normally see enormous number of stars in the skies, you just look up to the night skies and can see the shooting stars even before the peak (August 13 in 2011.)  I saw several last night.

It is said that your wish will come true if you can recite the wish three times to a shooting star before it disappears.  But who can?   Let's consider just seeing one brings you a luck.
Posted by Cognoscenti Japan at 3:36 AM

I just went to see the exhibition "SHARAKU" at Tokyo National Museum.  It is fortunate that all the works except one that are on loan from overseas museums are here in Japan, after the major earthquake.  It is of course an excellent exhibition:  A great line-up of works and a clever layout that follows the 10-month career of the mysterious artist.

Theories abound as to who Sharaku was.  Though I really don't care who he was, I kept thinking of  a theory while I was in the museum.  What if "Sharaku" was a group of artists or business persons who promised to carry out the 10-month project under cover?  Perhaps the artists took turns and that was the reason for the change of trends within the short period of time?

In any case, it doesn't change the fact that Sharaku has left great works!
Posted by Cognoscenti Japan at 1:54 PM

Recently I saw a movie titled "L'Amour Fou."   It is a documentary on the life of Yves Saint Laurent and his lifetime lover and partner Pierre Bergé.  The film starts in Christie's where the couple's enormous amount of art collection gets auctioned after Saint Laurent's death. Obviously art was integral to the couple's life together.  It could be a source of inspiration, a symbol of success and a reflection of their shared sense of beauty.

The film is entitled simply "Yves Saint Laurent" in Japanese.  I agree that it must have been the best title in terms of marketing, but at the same time it has lost the connotations that the original title contained, such as passion, obsession and devotion.

It seemed to me that Bergé's decision of letting go of the art objects that once filled the couple's house was almost equivalent to the ritual of scattering the ashes of the deceased.
Posted by Cognoscenti Japan at 12:02 AM

Today it was officially announced that the cherry trees in Tokyo started blooming, 6 days later than last year.  The announcement is made every year when the Meteorological Agency confirms more than 5 flowers in bloom on one of the cherry trees at Yasukuni Shrine, located near the Imperial Palace.

Obviously we were not in the mood to cheerfully look forward to the flowers, and since it has been especially cold for the past week, the news seemed to have appeared out of nowhere.

I am speechless when I think of people who suffered the most in the earthquake and tsunami,  and grateful to be safe and alive.

The cherry flowers will be in full bloom in a week or so.  I hope the flowers will bring hope and strength to our country, and remind all the people that Japan is such a beautiful country.
Posted by Cognoscenti Japan at 10:26 PM

When you think of Nagasaki City, what comes to your mind first?  A port town with old western style architectures, trams, and the memories of Ryoma Sakamoto.  But do not miss the Penguin Aquarium.  I believe it is the only aquarium in Japan dedicated to penguins! 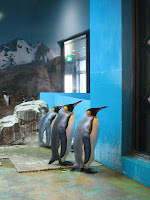 Penguins are interesting animals.  They swim like rockets.  In contrast, on land they stand still like statues.  They seem indifferent to others and won't budge, with some of them facing the wall.  I start to wonder if they are in meditation...
...until their feeders come.  The penguins rush to the humans who feed them every day.  They push and compete for fish.  It is hard to believe they are the same animals that I just saw.  I see.  They were just saving their energy.
Posted by Cognoscenti Japan at 12:52 AM