The historic villages of Gokayama and Shirakawa-go consist a UNESCO World Heritage site.  Old folk houses in the traditional gassho-zukuri architectural style are still preserved in the villages.  It is a landscape you rarely see in the present Japan.

The area has heavy snows in winter.   With the roofs covered with thick white snow, the old houses get lit-up on selected dates in January and February every year.  I went to see the sight in Shirakawa-go on January 28.

As the sky gets dark, the lights get brighter and warmer.  It was a fantastic view, just like I had seen in postcards. 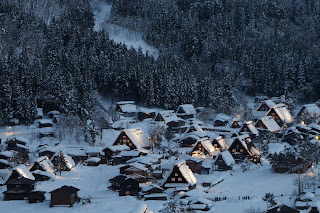 Though the place is not an easiest access (because of the snow and limited public transportation),  people from all over Japan and even from overseas flock to the event!  The villages are accessible from Kanazawa, but there is no public bus that brings you back from Shirakawa-go to the city after the light-up event  (17:30-19:30).   It is recommended that you hire a car, or book a local inn way in advance. (There is no 5-star hotel in the village.)
Posted by Cognoscenti Japan at 12:10 AM